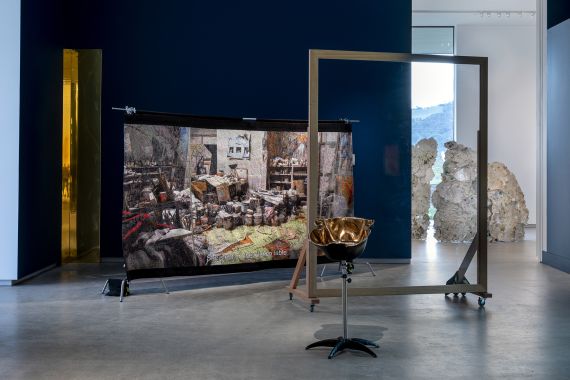 What was the brief for the TarraWarra Museum of Art Biennial 2018 and how did you arrive at the theme “From Will to Form”?

I was invited to curate the biennial by Victoria Lynn, and there was no brief – so to speak – but instead an invitation to curate an exhibition that responded to international curatorial ideas, as well as pushing the limits of curatorship and presenting an innovative approach.

The concept of From Will to Form was an idea I had been working on for some time in various forms, and perhaps began during the curating of Primavera 2016 at the MCA in Sydney. This exhibition explored some of the same ideas from a physical bodily perspective, relying on the fields of neuro-aesthetics and embodied cognition to understand the interplay between the artwork and the viewers body.

I began to think of this as something that was free, and rebellious in the artworks, that didn’t want to be pinned down or told how to behave or move. That this wilful spirit wanted to move from the world into the object and then out into the world again, and I felt that these artists had captured this force, this will in their works.

I found that Gilles Deleuze had developed this idea in Francis Bacon: The Logic of Sensation (1981) where he discusses art as: “In art, and in painting as in music, it is not a matter of reproducing or inventing forms, but of capturing forces. For this reason no art is figurative.”   and that “there is no longer a subject, but only individuating affective states of an anonymous force.”

And so, I began to think about will as that which was innate within the artworks that I wished to understand and highlight. For Nietzsche, and for Deleuze these forces were the world, the forces were not just captured in artworks, but the world revealed the will to power through the flows of forces and the infinite dynamism of these exchanges.

This idea of a will to power is described by Deleuze as being at the heart of all activity, and comprised of “a play of forces and waves of forces…a sea of forces flowing and rushing together”. This way of thinking about the interaction between forces offered an approach that described how forces might confront each other within an entire exhibition environment.

So, will became the term that I based my curatorial research around. With these foundations in place, I began my research for the biennial, travelling and meeting with artists who I suspected operated in this space where will was passing into form. This foundation offered a way of focusing attention on that which lay below or within the process of art making, rather than inscribing onto the object, or harnessing the artwork to an external framework, I wanted to try and start from something inside the objects will, focusing on its force.

But then, what of form? The exhibition is after all entitled From Will to Form. If will is the activity of forces interacting, then what form might they take? how do these energetic exchanges manifest into form? What exchange has occurred as the forces are captured in these works. What of forming?

As I travelled across Australia meeting with artists, these ideas of Will began to settle into 5 remarkably consistent conceptual and threads, where artists expressed their will as originating in or being affected by 5 distinct forces, or fields.

And these five groupings formed the basis for the exhibitions structure, which unfolds across the physical architecture of the gallery.

There is a tremendous freedom being an independent curator and public galleries who offer opportunities such as this are rare and wonderful.

The team at TarraWarra are exceptionally skilled, with impeccable project management and media staff, and Director Victoria Lynn runs the institution with wisdom and humanity. I felt incredibly fortunate to be working with all of the team there.

I think independent curators bring a vision that is not tempered by the bureaucracy of an institution; there is an idealism that can be numbed through being involved in the everyday administrative load of working within an institution. My curatorial practice is also informed by my PhD, which has allowed me to deepen my practice in a way that would not be possible within the quick turnaround pressures of working within an institution, so perhaps this spacious, thoughtful or open stance is what independent curators might bring to a public galleries program.

I think its always important to introduce other voices - divergent, experimental and sometimes difficult ideas - into an exhibition program so that the creative discussion can always be tested and its parameters extended.

Will To Form: Activated will be held ‪on Saturday 20 October‬, what can audiences expect?‬‬‬‬

Will To Form: Activated offers opportunities to witness the forces within the exhibition activated. These will entail new choreographic responses by Belle Bassin, a major vocal performance in the grounds of Tarrawarra by Kusum Normoyle - where she channels the energy of the Yarra ranges into her vocal practice of amplified screaming, and Bridie Lunney will be performing, singing into her brass corners to ‘wake up’ the gallery and articulate and collapse the space between the body and the architecture.