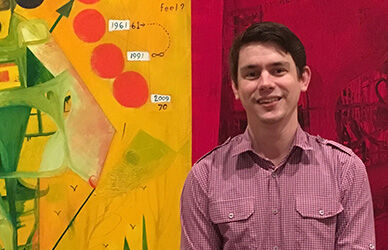 Eric Nash has been appointed as Professional Development Officer at the PGAV. Eric joins the PGAV having served as Curator, Gallery Services at the Perc Tucker Regional Gallery and Pinnacles Gallery in Townsville from 2013 to 2016. In this role Eric was responsible for the development and delivery of exhibitions, festivals, significantly contributed to the creation and implementation of a visual arts strategy and business plan, as well as professional development programs. Most recently Eric served as the Arts and Culture Officer at Melton City Council, a six month contract during which time he revitalised the City’s exhibition program, secured funding for a multi-faceted Graffiti Education and Street Art Activation program, supported the formation of the city’s sole artist group, and reformed the City’s Arts and Culture Advisory Committee. Eric brings to the role significant experience across a number of roles at a major Queensland regional gallery, which will be invaluable as he takes on the development and implementation of the PGAV’s new professional development program.