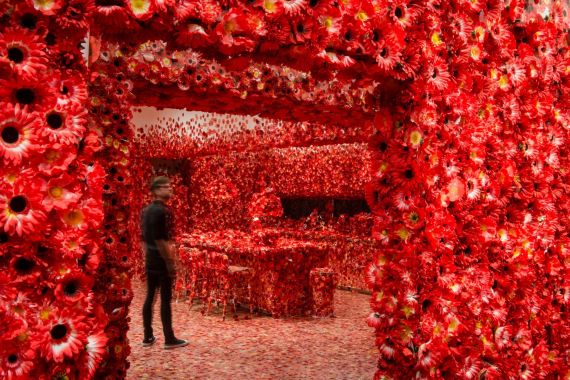 The inaugural NGV Triennial has finished its record-breaking run with a final attendance of 1,231,742, making it the most visited exhibition in the NGV’s 157-year history.

With an average daily attendance of 10,096 across its 122-day run, the free NGV Triennial surpassed Melbourne Now by more than 450,000 visitors.

Proving to be one of the most popular works of the exhibition, more than 550,000 flower motifs were used to cover Yayoi Kusama’s Flower obsession installation. This participatory space, modelled on an everyday apartment, was commissioned especially for the NGV Triennial and encouraged visitors to ‘obliterate’ the rooms with vibrant 3D flowers and flower stickers.

More than 123,000 children visited the NGV Triennial including those that attended the NGV Kids Summer Festival held in January. The exhibition featured a dedicated children’s exhibit by Dutch art collective, We Make Carpets that encouraged children to engage with the material world, using household objects like kitchen sponges and pool noodles to create patterns through interactive installations.

Minister for Creative Industries, Martin Foley said, ‘The NGV Triennial was a landmark exhibition for our state – its scale, ambition and impact should be celebrated. People from right across Victoria, Australia and the world flocked to the NGV to see it – and it delighted visitors of all ages and backgrounds. There is clearly an insatiable appetite in our community for contemporary art and design. The success of the Triennial exhibition cements the NGV’s position as a global powerhouse, and Victoria’s reputation as the creative state.’

Director of the NGV, Tony Ellwood said, ‘We are delighted so many visitors to the NGV have embraced the NGV Triennial exhibition, which showcased some of the most diverse art and design from across the world. For the NGV, it was a milestone presentation of more than 100 artists and designers from 32 countries, with their work exploring some of the most vital issues facing contemporary society. We are humbled and honoured that our visitors have responded so enthusiastically to the NGV Triennial and that it has brought moments of joy, introspection and reflection to so many.’

Image: Exhibition image of Yayoi Kusama’s Flower obsession 2017 on display in NGV Triennial at NGV International 2017. Supported by the NGV Women’s Association, with travel support from the Australia-Japan Foundation of the Department of Foreign Affairs and Trade. Photo: Eugene Hyland.