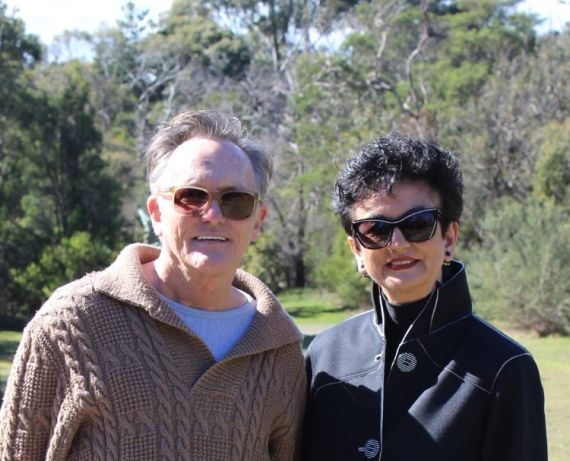 McClelland Sculpture Park+Gallery have announced artists John Meade and Emily Karanikolopolous as recipients of the $250,000 2018 Southern Way McClelland Commission for their elegant sculpture, Love Flower, to be installed in August 2019.

The monumental and enchanting new sculpture will be sited along the Peninsula Link freeway in Melbourne’s South East as part of a unique and award-winning commitment to public art. It will replace Gregor Kregar’s sculpture Reflective Lullaby that is located on the Cranbourne road site, on the Langwarrin exit ramp close to McClelland Sculpture Park+Gallery.

This major commission forms part of an ongoing program of new sculptures that will alternate every two years between sites at Skye Road and Cranbourne Road along Peninsula Link, resulting in 14 commissions over the 25-year period to 2037. Southern Way generously donates funding for the sculptures. After four years on public display the commissions form part of McClelland’s permanent sculpture collection.

‘The fifth in this highly regarded series of Southern Way McClelland Commissions, John Meade and Emily Karanikolopolous’ Love Flower will be iconic and awe inspiring. As public sculpture this work will engage in ways with the aesthetics of nature, as well as being an absolutely magical sight for all who pass by,’ says Lisa Byrne, Director, McClelland Sculpture Park+Gallery.

Simon Lawrie, The Balnaves Curator of Australian Sculpture at McClelland, says ‘Love Flower has been selected from more than 60 submissions, and will be installed at the Cranbourne Road site in late 2019. Gregor Kregar’s Reflective Lullaby, affectionately known as the ‘Chrome Gnome’, will be removed and replaced with the new work by Meade and Karanikolopolous, which is bound to enchant locals and visitors to the Mornington Peninsula. This is the fifth sculpture to be created for display along Peninsula Link for a period of 4 years, before being donated to McClelland Gallery + Sculpture Park for permanent display.’

John Meade was born in Ballarat in 1956 and currently lives and working in Melbourne. He studied Fine Art at the Victorian College of the Arts, before completing a Masters of Arts at RMIT and a PhD in Fine Art at Monash University. He lectures at Monash University and the University of Melbourne. Meade’s practice draws relations, often humorous and unexpected, between the metaphysical and surreal in the experience of contemporary life and domestic culture.

Emily Karanikolopoulos is an Australian artist who is a teacher and practitioner of the Japanese floral arrangement art of Sogetsu Ikebana. She is an active member of the Ikebana community of Australia, and she has attained the highest possible Ikebana accreditation outside Japan. She has exhibited in the Sogetsu Ikebana Exhibition Takashima Shinjuku in 2014, and has been awarded three first places in the Melbourne International Flower Show Shop Window competition.