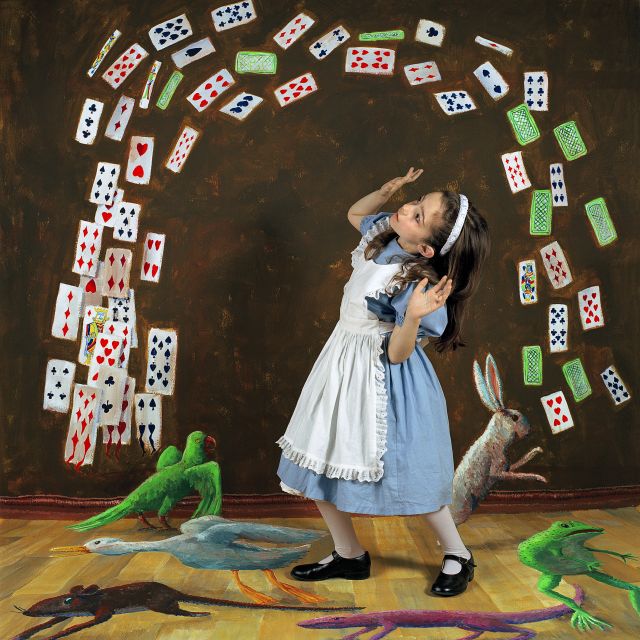 This exhibition comprises photographs by Australian photographer Polixeni Papapetrou (1960–2018) of her daughter Olympia, covering the period from Olympia’s birth (1997) until the artist’s death (2018). Throughout this time, Olympia played a particularly important role in the artist’s image making, assuming the complex roles of model and muse, collaborator and champion.

Following the birth of her daughter, Papapetrou’s work underwent a significant change. Her earlier work had focused on the carefully constructed and stage-managed worlds of people who lived, worked and played in disguise, including drag queens, wrestlers and avid Elvis fans. However, after Olympia’s birth, Papapetrou began photographing her children, Olympia and Solomon, and later their friends. Rather than making Papapetrou’s world smaller, this apparently inward turn opened up a limitless world of play acting, imagination and storytelling.

This exhibition surveys twenty years of Papapetrou’s practice and includes works from her best-known series, as well as lesser-known images. Olympia: Photographs by Polixeni Papapetrou was curated in collaboration with the artist’s family. It draws from the NGV Collection and the artist’s estate, and is the first major museum retrospective of Papapetrou’s work.

The NGV is publishing a monograph to coincide with the exhibition. It covers twenty years of Papapetrou’s practice and features contributions from Susan van Wyk, NGV Senior Curator of Photography; Robert Nelson, art critic and widower of Papapetrou; and Papapetrou’s children, Olympia and Solomon Nelson.