Maree Clarke: Connection to Country – I Remember When… 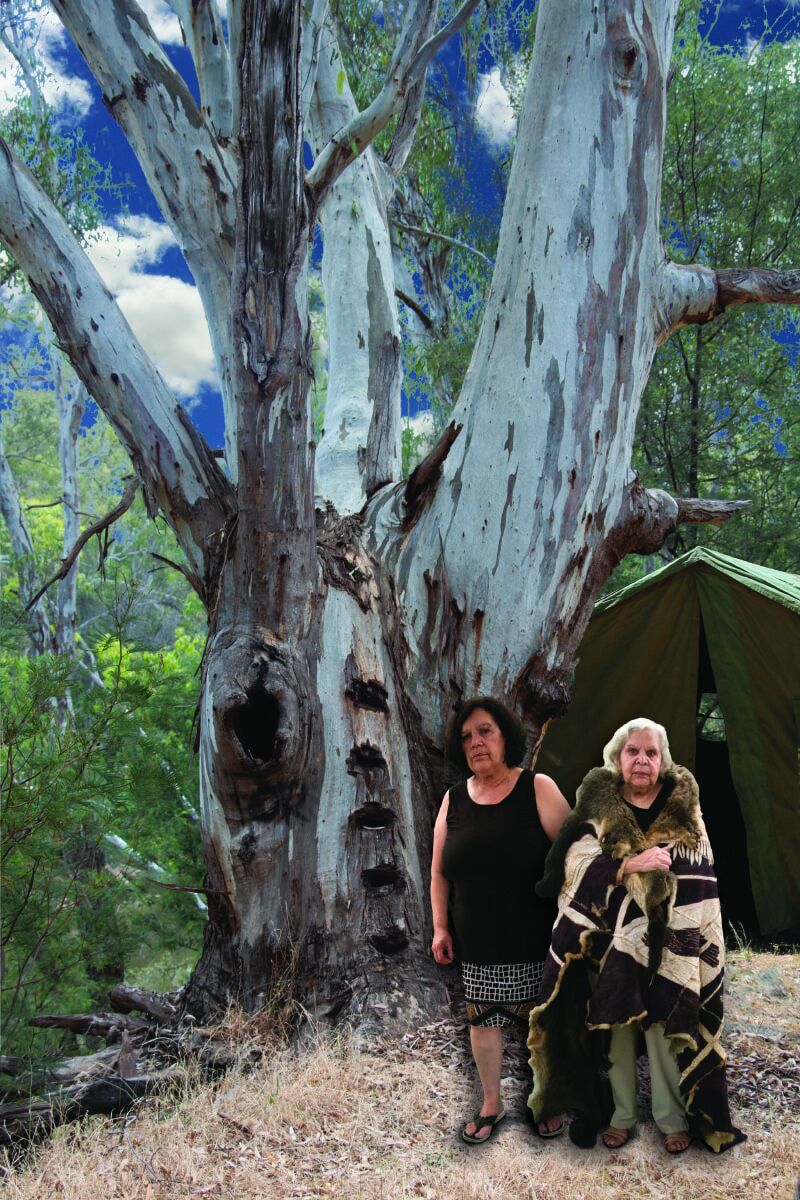 Maree Clarke: Connection to Country – I Remember When…

Maree Clarke has been a central figure in the revitalisation of South-East Australian Aboriginal cultural practices over the past three decades. A Yorta Yorta, Wamba Wamba, Mutti Mutti and Boonwurrung woman, her multidisciplinary practice encompasses a broad range of mediums, including photography, sculpture, painting and jewellery. Connection to Country – I Remember When…: Stories From Elders About Their Connection to Country, Culture, and Place, a new body of work featuring three large-scale lenticular lightboxes, celebrates Aboriginal culture and ongoing connection to Country.

Clarke worked with local Elders as collaborators and models in this series. Lyn Thorpe and Aunty Doris Atkinson (Yorta Yorta / Wamba Wamba / Woiwurrung) meet the viewers’ gaze in one image, Aunty Elsie Anderson, Aunty Yvonne Chesser and Aunty Lynette Maher (Wemba Wemba / Boonwurrung) huddle around a campfire in another, while Uncle Tommy Baksh (Gunai Kurnai / Yorta Yorta / Dja Dja Wurrung) stands proudly next to a scar tree in a third. Staged amidst the Flats, Reedy Swamp and Gemmill Swamp respectively, her subjects are enmeshed in local sites spotted along Kaiela (Goulburn River), rich with historical and cultural significance for the local Aboriginal community.

Traditional and contemporary signifiers converge in the photographs. The Elders are wrapped in traditional possum-skin cloaks and at the same time, also wear Nike sneakers, spectacles and jeans. Through this conflation of these different temporal markers, Clarke suggests a continuum of customary ceremonies, objects and the language of her ancestors within Aboriginal society today.

Clarke has embraced cutting edge photographic techniques as a way of telling her ancestral stories throughout her career. The lenticular prints in Connection to Country create a shimmering sense of movement that evokes the cultural belief that the land is alive and asserts Aboriginal peoples’ continuing role as custodians of this Country.

Maree Clarke was born in Swan Hill and lived for a time on Balranald Mission and Munatunga Mission, Robinvale, before settling in Mildura. She is connected to the traditional lands of the Mutti Mutti, Wamba Wamba, Yorta Yorta and Boonwurrung peoples. In 1988 Clarke established an outlet for local and national Aboriginal art through the Mildura Aboriginal Cooperative, which that enabled artists and other community members to learn and sell their works within an Aboriginal community organisation. During this period Maree Clarke also worked on developing her jewellery designs.

By the early 1990s, Clarke was an important figure in the Victorian Aboriginal art scene, involved in introducing curating the diverse talents of Indigenous artists from around the state, and in 1994, Clarke became the first Koorie Arts Officer at the City of Port Phillip, Melbourne. In 1996, Clarke initiated, co-coordinated and co-curated the We Iri We Homeborn Aboriginal and Torres Strait Islander Arts Festival, renowned for including the largest collection of south-east Australian Aboriginal works of art featured in a single exhibition. During the late 1990s Maree own art practice continued to develop, marked by her exploration of her family’s designs, markings and totems. Between 2004 and 2009 Clarke studied and completed a Master of Arts at RMIT University, Melbourne.

Opening Hours
The SAM Shop, Kaiela Arts and the Greater Shepparton Visitor Information Centre are now open to the public, with the official Grand Opening of SAM to take place on 20 November 2021.