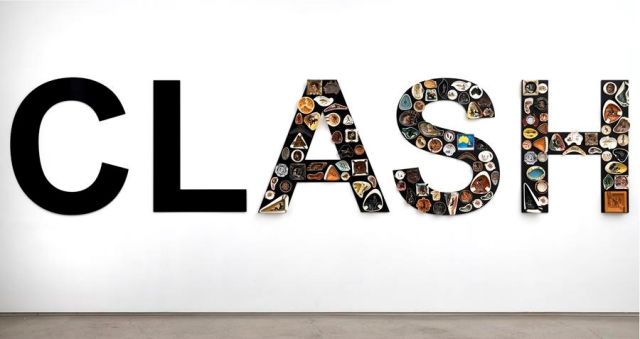 This summer SAM presents Collector/Collected, a maximalist exhibition exploring the art of collecting.

Collector/Collected is an exhibition in three parts. It showcases two major collections of Australian studio pottery from the 1960s and 70s: the Studio Pottery from the John Nixon Collection and SAM’s own collection from this period. SAM presents these two significant collections alongside the work of four contemporary artists, Tony Albert, Kate Daw, Geoff Newton and David Sequeira, each of whom explore ideas of collecting and collections.

Studio Pottery from the John Nixon Collection was conceived and presented at Deakin University by curator James Lynch in 2018. Collector/Collected presents an expanded iteration of this project, and invites contemporary artists to respond to the idea of collecting in a contemporary context.

Nixon’s collection features works by 29 artists living and working in and around the eastern suburbs of Melbourne throughout the 1950s, 60s and 70s. Among the artists featured are those associated with the well-known Potter’s Cottage in Warrandyte, including Sylvia and Artur (Artek) Halpern, Charles Wilton, Gus and Betty McLaren, Phyl Dunn and Reg Preston, Fritz and Kate Janeba and Elsa Ardern.

“Looking at this incredible collection of hand-made pottery: wrenched, moulded and fired from clay sourced from local earth around the suburbs and backyards of Melbourne – the beating heart of creativity itself can almost be grasped. This exhibition is testament to how passion, knowledge and dedication can transform the everyday act of collecting into cultural treasure,” explains Deakin University Curator, James Lynch.

Nixon’s collection will be joined by pieces by the same artists from SAM’s own collection, totalling close to 350 works in the most comprehensive presentation of their work to date, and captures a particular moment in Australian history.

“In part, the value of collections is how they enable us to reconsider and rethink history through our own contemporary lens and times,” says Director of SAM, Dr Rebecca Coates.

“Each artist’s project in Collector/Collected reveals an aspect of the motivations for collecting - from obsession, compulsion, means of discovery and exploration, to just plain delight of the aesthetic object. Collector/Collected continues our examination of the relationship between art, design and architecture through collections including ceramics, for which SAM has become known”, says Ms Coates.

Modernist art, architecture and design emerged in Australia, reflecting post-war aspirations in domestic ware and functional items. Cooperatives and studios such as Potters Cottage and Cottles Bridge were formed by artists and craftspeople to meet the growing public demand for the hand-made but affordable – an integral part of the aspiration for a modern lifestyle of new housing and local manufacture.

Ceramics and the hand-made were part of this trend, and the houses of Warrandyte, Eltham and Hurstbridge of this period often featured modernist design elements such as mud-brick architecture, Scandinavian furniture, sea-grass matting and Australian native gardens. Many of these features are again having their moment in the sun, alongside our continued contemporary obsession and love of all things ceramic.

The works were sold in department stores, such as Georges, David Jones and Myers in Melbourne, as well as the well-known Little Collins Street store, Primrose Pottery Shop. A vital commercial outlet for a group of emerging and established artists, potters and designers in post-war Melbourne, including studio potters Allan Lowe, Arthur Boyd, John Perceval and Neil Douglas, with proprietors Edith and Betty MacMillan working closely with suppliers, and commissioning and taking works on consignment.

In and around the two ceramics collections are four projects by leading contemporary artists Tony Albert, Kate Daw, Geoff Newton, and David Sequeira.

Tony Albert’s CLASH (2019) continues the artist’s ongoing series of installations which use text and appropriated imagery to examine the historical representation of Aboriginal people and culture. As with other works in this series, CLASH draws on Albert’s own extensive, personal collection of largely mid-twentieth century ‘Aboriginalia’, a term used by Albert to describe kitsch domestic objects and tourist artefacts that feature naïve ‘caricaturing’ of Aboriginality. The title CLASH points to an underlying friction, a clash of experiences and cultures.

Paintings from Geoff Newton’s The Victorian Scene (2015) feature the streetscapes immediately visible from the entrance of regional art galleries and museums across Victoria. Collector/Collected presents 11 paintings from this series, showing the vistas outside the following galleries; Ballarat, Bendigo, Benalla, Castlemaine, Geelong, Mildura, Mornington, Shepparton, Swan Hill, Wagga Wagga and Warrnambool. Newton captured the day-to-day detail of the scenes  – furniture, handrails, benches, carparks – using his camera, which he then outsourced to be painted and reinterpreted by artists at a manufacturing company in China. The scenes prompt broader reflection on the role and history of these buildings, each with their own stories, collectors and collections, while the paintings’ production also inherently raise the intersecting issues of authorship, reproduction, commodification, and the system of collecting and valuation.

For David Sequeira, colour is a catalyst for his collecting. Sequeira started incorporating monochromatic vessels in his work in the mid-1990s, sourcing them from second-hand stores and op shops. Dating predominantly from the 1960s onwards, Sequeira’s collection of coloured vases – often considered kitsch and discarded by their owners – introduces another aspect of modern design. Gathered together, the experience of the individual vessels is transformed, from an object that is self-contained with its own chain of connection to its original context and use, to one that exists as part of a larger composition based on the study of colour and form.